Couldn't resist running some more blinds and cards after last, so I rolled out a IABSM v3 game, Russians vs Japanese.

Japanese:
You are Lt. Siguhara, commander of 12th company, 4th Battalion, 37th Infantry Regiment. It's mid-1945 and your regiment is deployed in a "quiet" section of the fight versus the Russians. CPT Irosaka, commander of the 4th Battalion, is tired of sitting around waiting for the Russians to attack. So you've been tasked to go out and stir up a small bit of Russians so the captain can get his battalion in the fight. There's no tanks available, but the captain found you a 81mm mortar and a IG plus 3 MMGs, one to supplant the lack of 50mm grenade dischargers in one of your platoons.

When you've made contact and developed the fight the CO will bring the other companies into the battle and press as hard as possible.

Russian:
You are CPT Orekov, commander of 5th company, 2nd Battalion, 119th Infantry Regiment. This morning your comrades in the air corps claimed they saw Japanese troops moving in your direction. The regimental CO doesn't believe it, the battalion CO doesn't believe it, but the Division CO says go take a look. So you're going to take a look. The BC found you some Maxims and an 81mm mortar and claims he'll shake you out a tank or two when he can.

If you find anything bigger than a patrol, you're to call back to have division arty light 'em up.
Top

Started out slow, moving the blinds on 1 dice to get back into the grove of the game. On Turn 6 all the line platoons were spotted and deployed in columns of squads in line (due the size of the table). From the top of the table with the Japanese on the left they laid out 3rd, 2nd in the middle and 1st to the close side, while the Russians went their 1st platoon opposite of the Japanese 3rd, 2nd in the middle and 3rd on the close side. Each support platoon spent their game within 12" of their end of the table.

From the Japanese end: 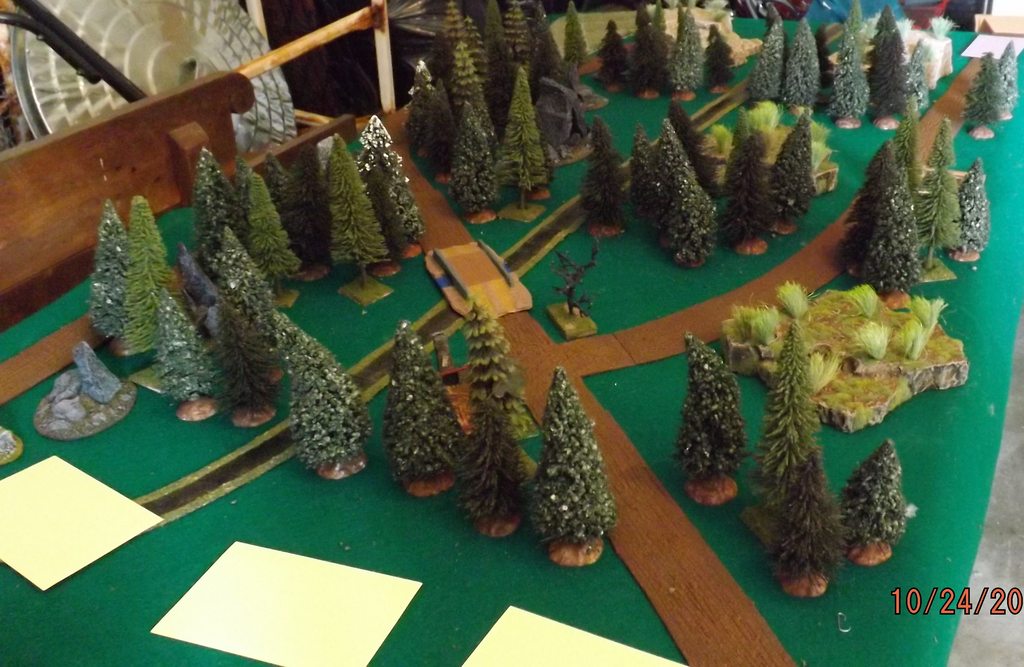 From the Russian end: 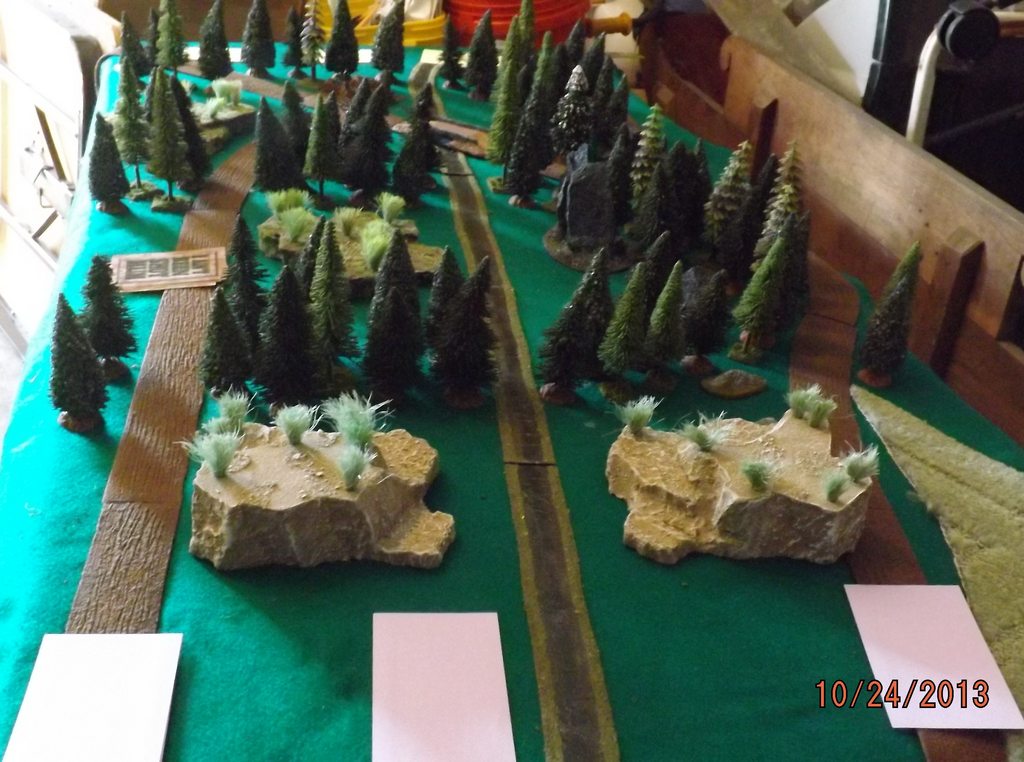 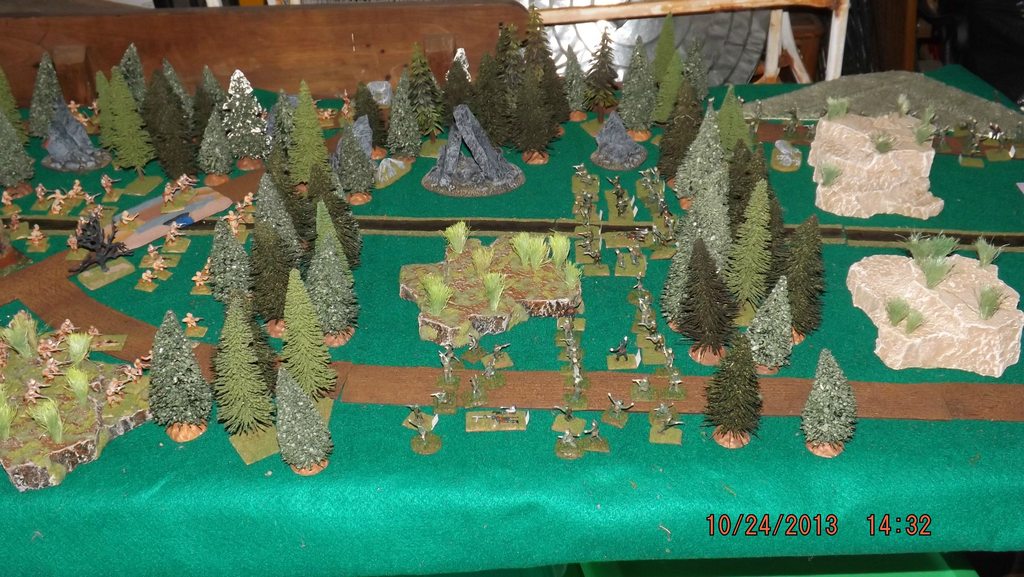 Turns 6 through 10 were a bit of jockeying for position and lots of shooting:

Turn 11 saw the company Big Men attach a MMG to each platoon that didn't have one. It also saw the first close combat (CC) between the 1st squad of the Japanese platoon and the 3rd squad of the Russian 1st, resulting in the Russians bouncing back 8" and being pinned with 4 dead and 3 shock while only dishing out 2 dead and 1 shock. Below, the CC happened on the left middle of the picture: 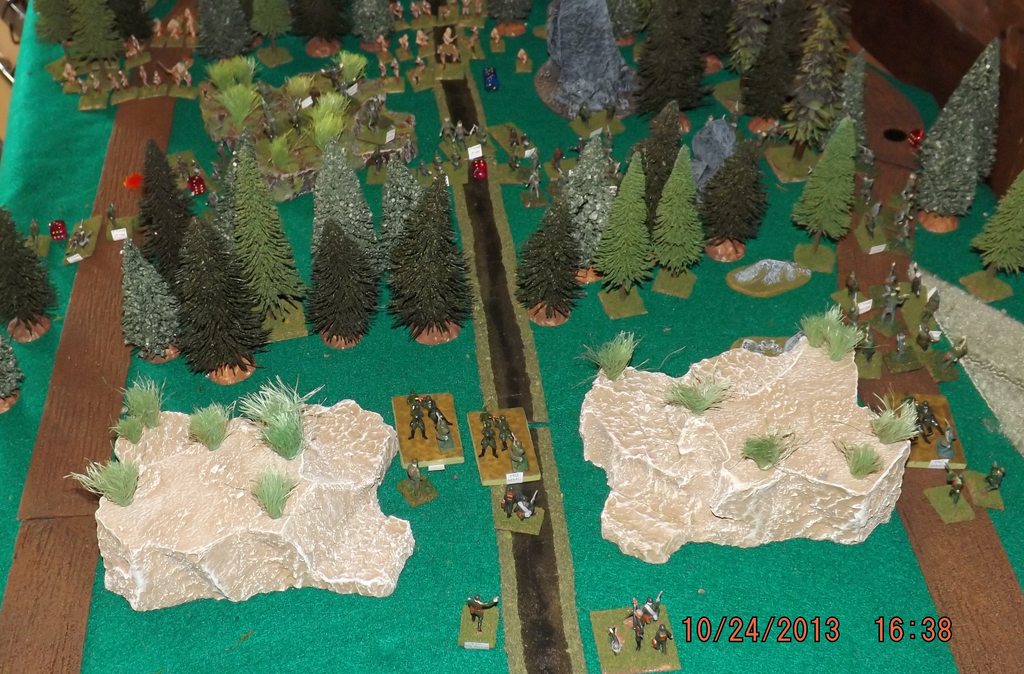 Turns 12 and 13 saw more exchange of shooting and after the end of Turn 13 the Russians had lost 16 and the Japanese 11, with bunches of shock on both sides.

Turn 14 and the Japanese pressed the center with a Human Wave attack resulting in 3 dead for the Russians and 1 for the Japanese, again bouncing and pinned the Russian squad. At the end of this turn count was Russians down 28, the Japanese down 18. 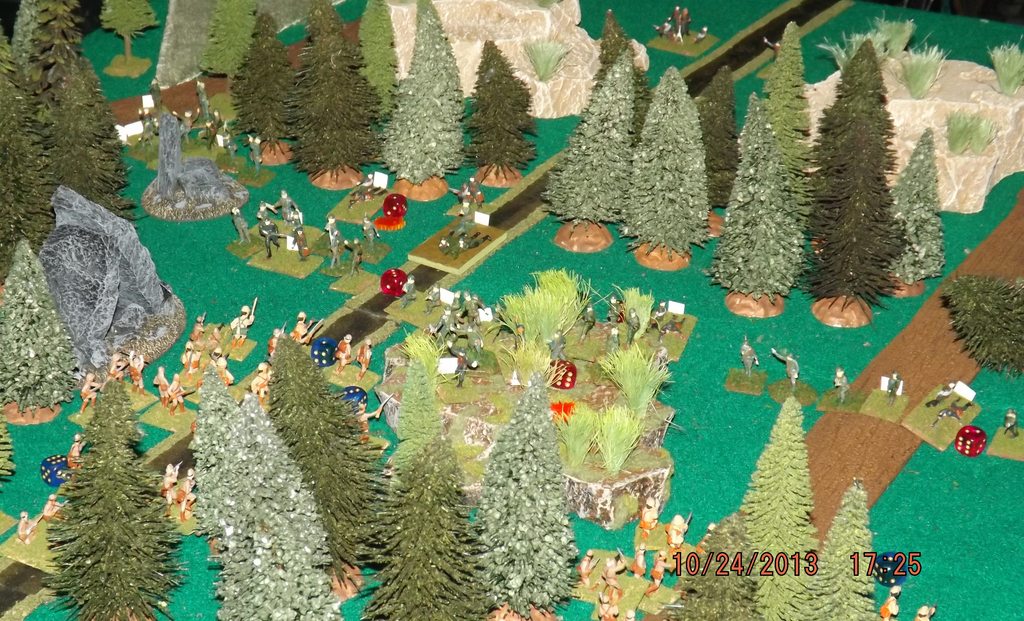 Turn 15 saw the Japanese continue to press the center, but this time the Japanese lost 5 and picked up 3 shock while the Russians lost 3 with one shock. Turn 16 started with the Russian middle taking the fight back to the Japanese middle, with a two round CC that eliminated both squads participating. At the end of all of this combating and shooting the count was Russians -41, Japanese -36. 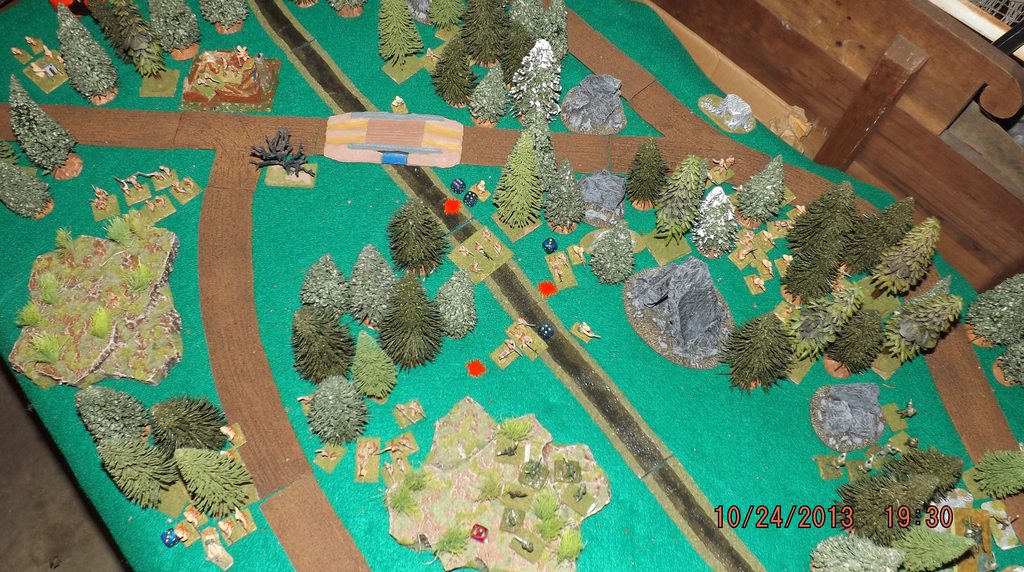 During Turns 11-17, the left platoon of the Japanese vs the right of the Russians contented themselves with just shooting, until the Sherman showed up and took out the MMG with 3 22" shots, spending its Activations on aiming then shooting.

Turn 18, the 4th (50mm) squad of the Japanese 2nd platoon (center) charged the Maxim that was attached to the Russian 2nd. Two rounds, the Maxim was gone and the Japanese had a S/L and one discharger left with 10 shock.

Then Turn 19, where the fight of the game happened when the 2nd squad of the Japanese 3rd platoon took on the 3rd squad of the Russian 1st platoon which had been quietly sitting on the high ground taking sniper shots and had only become unpinned on the card before the fight. 3 rounds, the Russians scored 14 kills and the Japanese 12. The only troop standing was the 3rd P/L who survived all the tests. 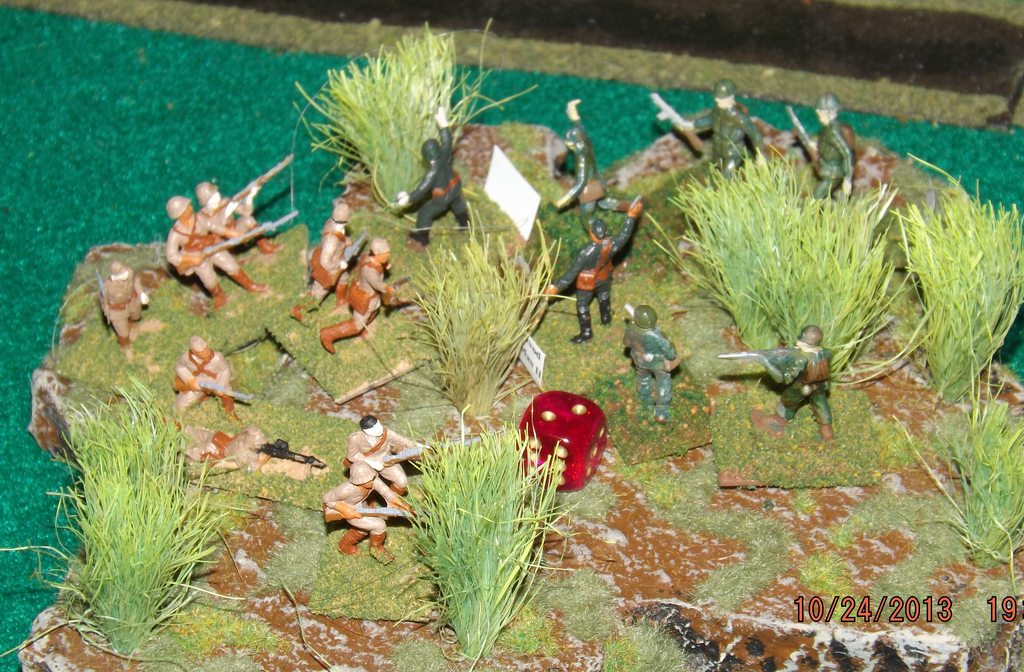 That was it, as the Russians, mostly because of combat results, had been driven both back to the last line on the table but more importantly, out of the beaten zone of the incoming stonk from the Russian division.