We played around with v3 of the rules a bit, going through a couple of specific combat scenarios and the like. Then we lined 'em up, John as the French and I ran the Allies (OOB here) and played short-ways across the table.

From the Allied left/French right, here's the table: 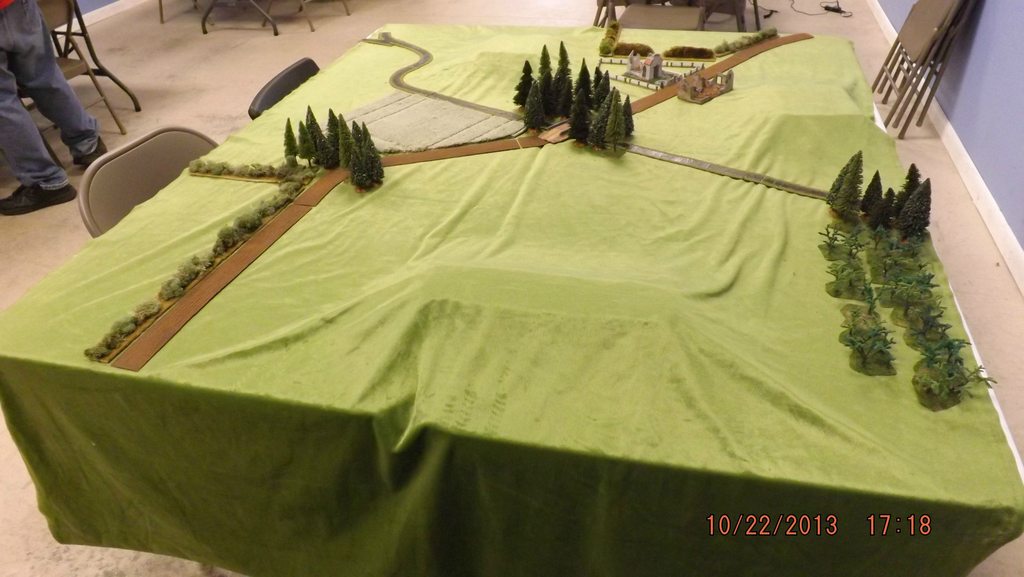 Turn 1 was slamming blinds across the table. The Allied 2nd Division and cavalry were told to hold the left while the weight of the Russians in the center and Prussians on the right were to wheel left and roll up the French, who played 2 of their divisions on their right and their cavalry went to the right off of the center blind.

Turn 3, the Allied cav charged the French cav, and both squadrons bounced like basketballs: 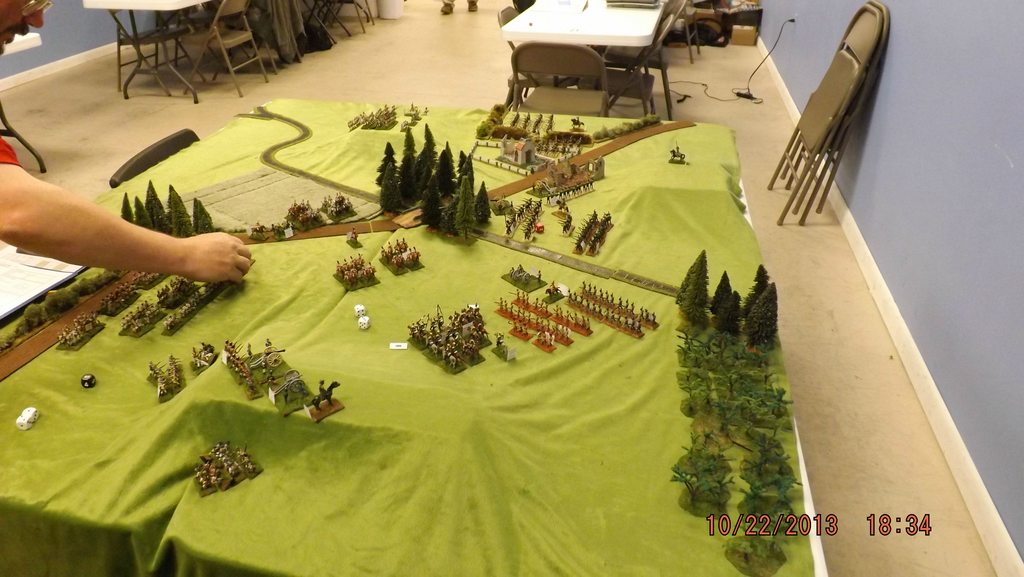 The Allied left saw the 7-battalion 3rd Divison deployed early due to being spotted, then they had to slog through the terrain and never really entered the game: 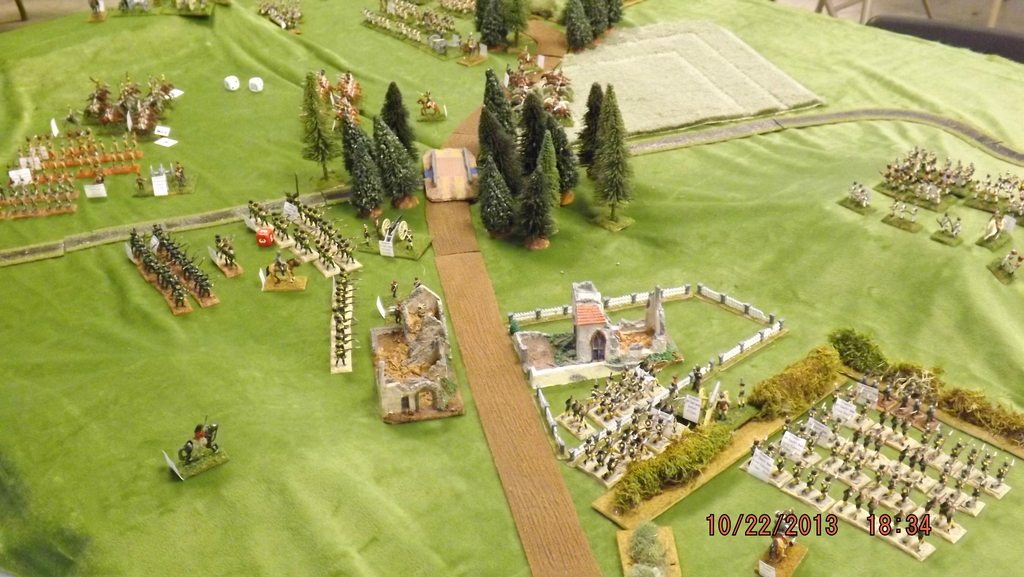 Back on the right, the French heavy cavalry did mean things to the Tyrolean battalions while the Austrian portion of the Allied 2nd Division did what it could on "Hold" orders with two battalions against 2 infantry and the whole of the French cavalry division: 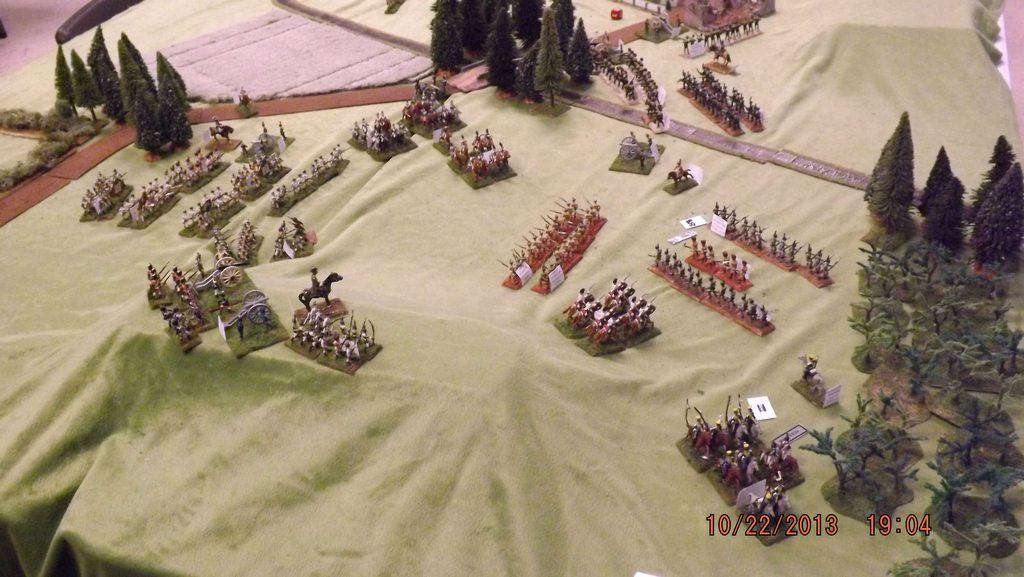 And in high point move of the Allies for the game, the Uhlans took one of French Hussar squadrons from behind and eliminated it (at the same time the two Austrian battalions were getting squeezed hard): 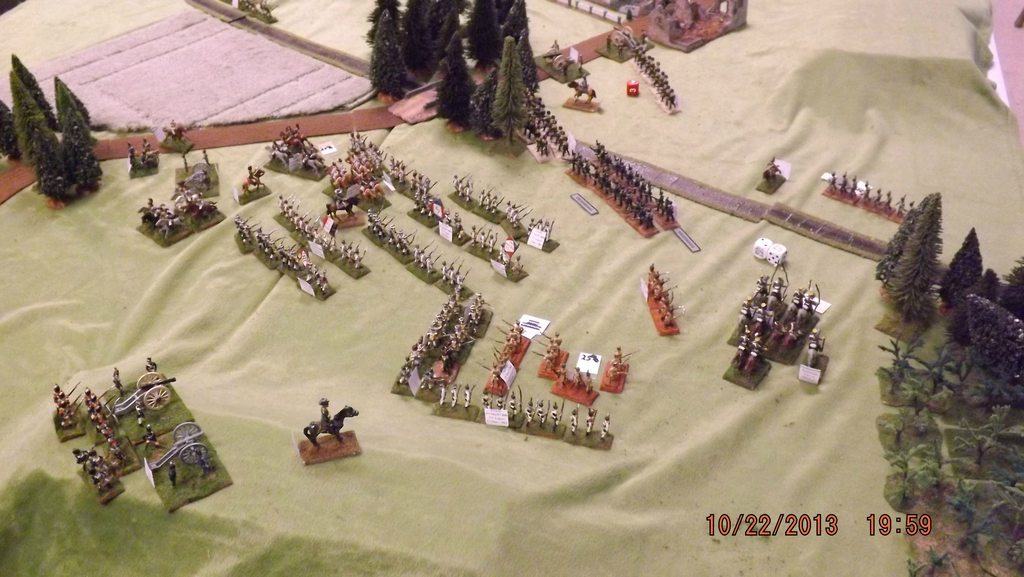 Looking into the Allied center from the French right, that's a pretty awesome array of units: 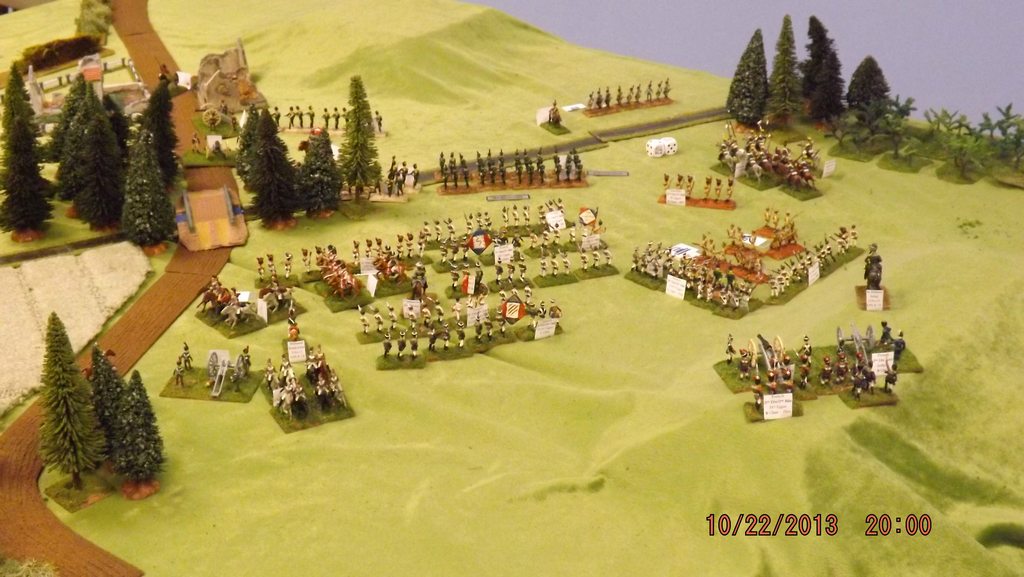 While on the Allied right the Prussians forced the French left off the high ground: 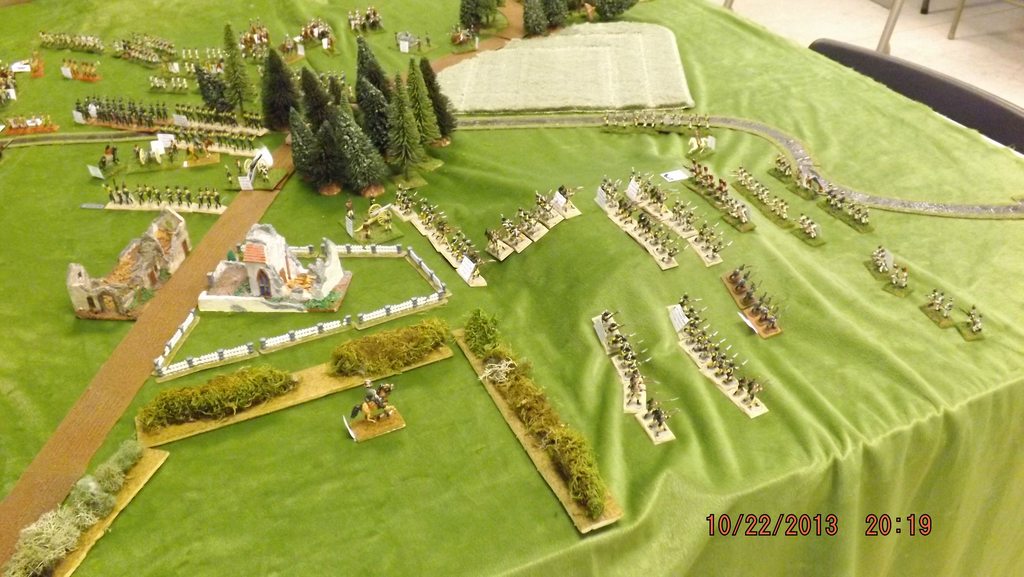 In the end, the Allied left was whacked, the center had set itself and the right was going to push: 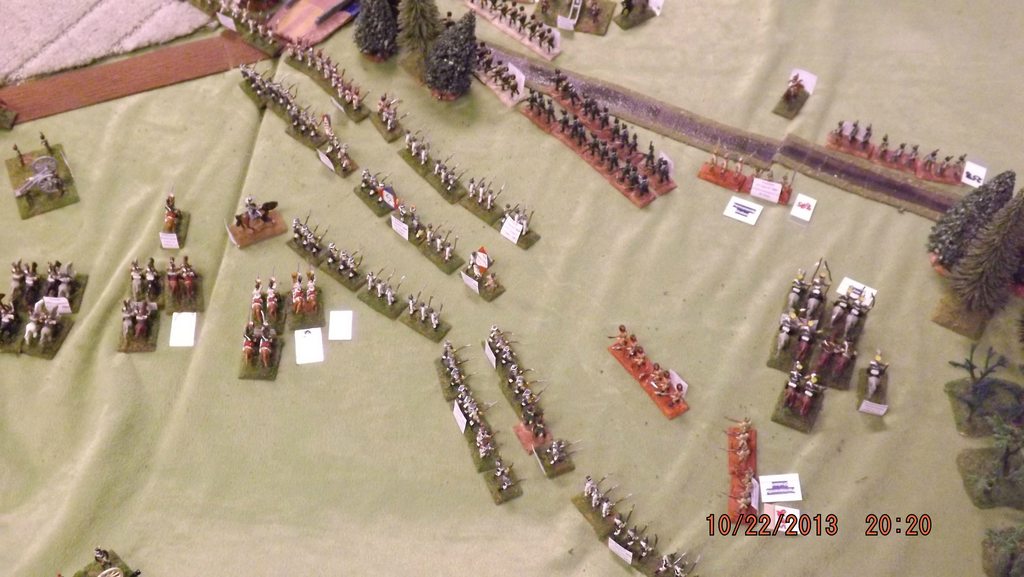 Over all, the game ended when the head long Allied cavalry charge in Turn 3 ended badly, eliminating the Dragoons by the end of Turn 4 and taking the Uhlans out of the game for 3 full turns. That left me back footed and with the bad Allied command PiPing I couldn't push the Prussians fast enough through the terrain and run the French left back on his right. And in the mean time the French had for all intents and purposes destroyed the Allied 2nd division (8 of 26 bases left), eliminated the Dragoons and only lost 1 of 8 cav squadrons and 3 infantry bases. A clear French victory at the time we had to end.

Another socialably enjoyable gaming evening we had with good set of rules and an excellent opponent.
Top

Felt good getting some cards and blinds on the table for a change.
Top

LFS did it for me. I have this bit of older (1960s) Scrubys painted/based and Napoleon's Battles and Empire laying around and never did much with them. Going through the tables solo was insanely annoying so they got put away. Then I ran across LFS which has the detail I want, the solo playability needed and is quite fun at the end of playing a game.

When I first read through it and there was no musket fire and unless you're opponent is....less skilled...you're only getting 1-2 hits per fire. But casualties add up quick and shaken/disordered units don't help much so you have to pay attention.

And, like I've found with most TFL rules, the easiest way to "balance" a game is to adjust the commander's rating. Less PiPs makes it hard to get troops to do anything.
Top
Post Reply
4 posts • Page 1 of 1